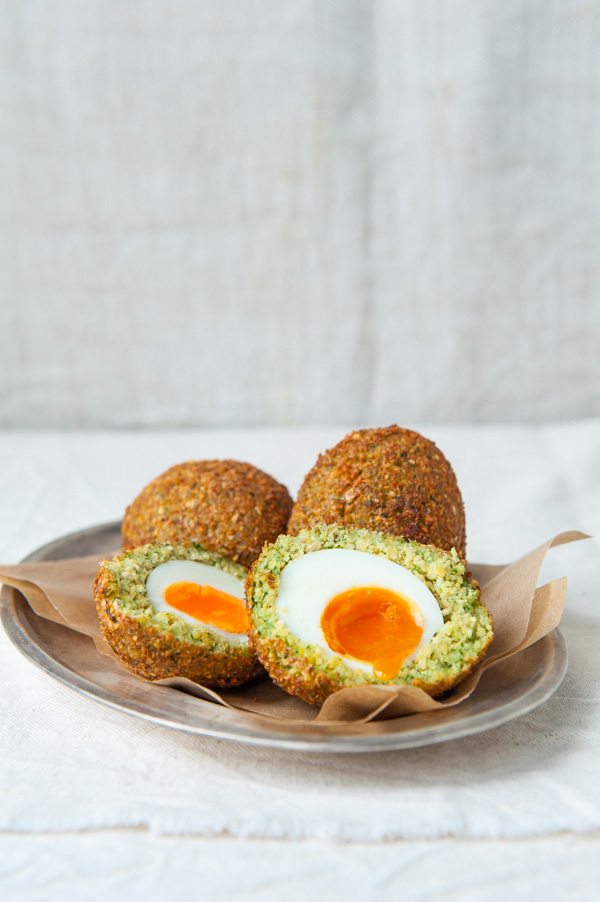 There are many schools of thought on the origin of the Scotch egg. Of the two most notable, the first claims it was invented by the London department store Fortnum & Mason in 1738 and the other claim is that it traveled from Persia to India with the Moghuls, where it is now known as nargisi kofta. In fact, a version of a kafta-encased egg appears in several volumes of Middle Eastern cookery books, including my upcoming cookbook. Anyone have any interesting historical information about the origins of the scotch egg?

Historical whispers aside, my idea of the perfect Scotch egg is a runny yolk and a crisp outer-fortification. Usually, Panko breadcrumbs would be used to create a crisp outer-layer but, what’s brilliant here is that the falafel mixture works to create that envious texture all on its own. The addition of ginger to the tahini is not at all traditional and quite unique in fact, but I find it really fits in with the tahini (tarator), which is traditionally paired with falafel. I really hope you’ll give this recipe a try, as I know you’ll enjoy this vegetarian version of the scotch egg as much as we do.

On another note, I’m thrilled with the positive response I’ve received regarding the Jewelled Kitchen cookbook cover. The design team over at DBP and I put a lot of time and effort into it. Also, a huge thanks to Lama Khatib Daniel -who’s also the talented artist behind my different website logo designs -for her input and support!

Print
Prep time
20 mins
Cook time
3 mins
Total time
23 mins
You can perpare the tahini dressing up to a day in advance (as and when you soak the chickpeas) to allow the flavours more time to develop and remove it from the fridge a few hours before serving, as I find it tastes better at room temperature. Verjuice can be found at most Middle Eastern grocers and you could also substitute it with white wine vinegar, cider vinegar, lime or lemon juice, though taste as you go because acidity of each ingredient varies. I recommend you add salt to the falafel mixture at the end to reduce moisture buildup.
Author: Bethany
Serves: 4
Ingredients
Instructions
3.2.2310