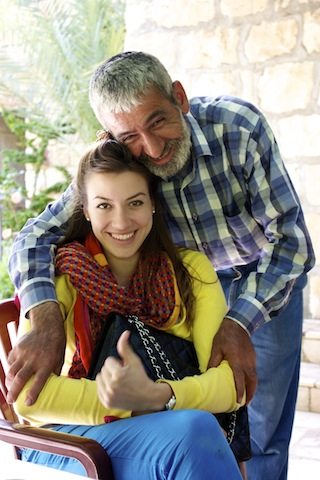 It’s hard to define Abu Kassem in a few words but genuine, humble and generous would be a good start.

He is known for the za’atar he grows in the fields surrounding his home in the south of Lebanon and considered to be one of the few enterprising farmers who started domesticating the wild za’atar plant (thyme), which was previously only collected from the wild. He’s since developed the brand Za’atar Zawtar which combines the fruits of his labor, namely the za’atar mixture which includes dried za’atar, sumac, salt and toasted sesame seeds. I first met Abu Kassem last year when Kamal Mouzawak of Souk el Tayeb introduced us and suggested I pay Abu Kassem a visit in his village of Zawtar. I shook Abu Kassem’s hand, exchanged a few words and told him I would be visiting him in the next month. I’ve since returned several times, with my own family and also taken Taste Lebanon guests to visit him and his lovely wife, Fatima, in the lush surroundings of Zawtar which include picturesque rolling hills (you’d think you were in Tuscany) and the meandering Litani River. On one of my recent trips to Abu Kassem’s, we drove through some narrow, dirt roads to reach one of his fields when he asked me to pull over quickly. He got out, walked off track and then hunched over. I knew he was picking something as I’ve seen him do this before when he introduced me to the varieties of wild za’atar. This time though he returned with a bushel of wild fennel. “hol elkon” (for you and your family) he said with extended arms. He then went on to share his wife’s recipe ratio for making them into fritters. 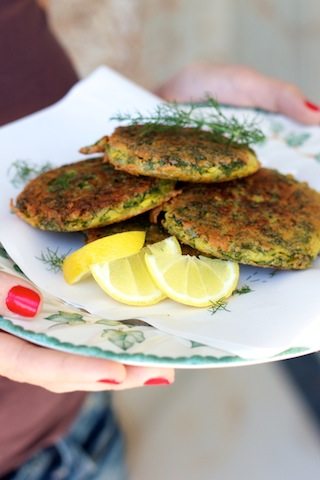 Fatima’s recipe only included flour, the herbs & eggs but when I got home I noticed some potatoes that were on their way out and decided to incorporate them into the recipe. They really turned out lovely and while you could bake them, if you wanted to, I personally find the “crispiness” you get from frying them so satisfying.

Note: I have just launched a new website for Taste Lebanon which also includes new services that we offer such as cooking workshops and more. If you want to join us on the 3rd edition of Culinary Journeys across Lebanon (September 15th-23rd 2011), then be sure to head on over and register as soon as possible. The next one is going to be a filmed documentary in collaboration with the Lebanese Ministry of Tourism, get in touch for more information.